Galaxy J7 2016 is a latest android smartphone of Samsung J lineup. J7 2016 is a pretty nice handset of Samsung released this year with some cool and amazing characteristics. J series of the company overall are the medium cost devices. However, its hardware and operating system are very much impressive. The users can root Samsung Galaxy J7 2016 without PC using the Kingroot v4.92 APK to customize and further improve its performance. In the tutorial, I will show you a concise method to Root Samsung Galaxy J7 2016 without PC.

Kingroot is an easy root tool compatible with almost all android devices. After rooting, you become the full admin of your device and get the overall authorization. Using a rooted device you can install custom ROMs, Remove bloatware (system default apps), make Nandroid Backup, and overclock / under clock processor. However it’s an unofficial operation and the device warranty gets void. You can get it back after restoring to stock firmware.

DISCLAIMER:  Root Samsung Galaxy J7 2016 running [Lollipop 5.0.1 -5.1.1] using this guide. Also, apply all these guidelines at your own risk. www.guidebeats.com would not be responsible for any wrong consequences. 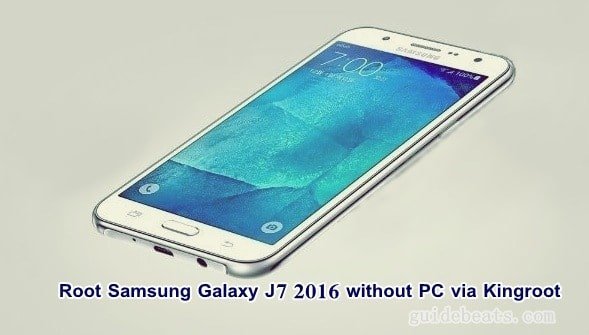 Asmat Ali- founder of guidebeats.com-
He has a deep interest in blogging and likes to share Android, iOS and Windows updates, Tips and Tricks with everyone. He is the main contributor to this website.